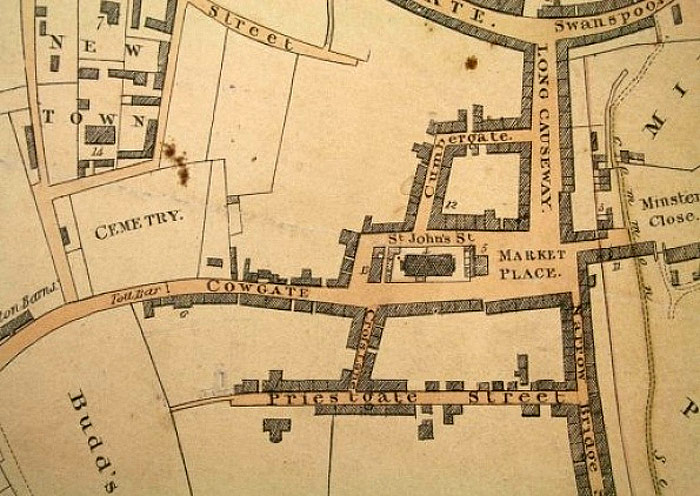 An interesting pice from Hannah Gray at the Peterborough Evening Telegraph ……

Today it is largely overlooked as a narrow one-way street, but historically Cowgate has been a vital artery into the town, home to some significant shops and dramatic events.

Local historian Stephen Perry said we should not underestimate the former importance of Cowgate. “It was one of the main routes into the city. It was laid out when the roads were set out by Abbot Martin in the 12th Century. It’s been a very important road and there’s lots to tell,” he said.

So why has Cowgate been so important to the city?

Well, for many years it was one of the main roads into the city, and had two-way traffic. It was home to the council office and a police station, which were in a building next to the Guildhall, and it was formerly home to a fish market. One of the most famous buildings to have existed on Cowgate was the Corn Exchange, which opened in September 1848. It was built on the site of a theatre and was used for trading as well as for events in the evening such as boxing and dances. There will probably be people in Peterborough today who can remember going on a date to the Corn Exchange for a dance.

Of course the Corn Exchange was eventually demolished and replaced with the building that until last year, held the Post Office. This was generally unpopular for its appearance, and interestingly, its predecessor the Corn Exchange was not universally popular either. Stephen said: “There is a suggestion that the people of the time didn’t like the Corn Exchange, that they thought it was quite ugly.”

Another important building on Cowgate was to be found on the corner of King Street. This was a department store, run for many years by John Lewis as Robert Sayle. This building came to a dramatic end in 1956, with a massive blaze that also impacted the surrounding area. Stephen said: “It was one of the biggest fires that Peterborough had ever witnessed. There were pictures of people rushing out with their cash registers because it affected the shops on the other side of the road.” After the fire, Robert Sayle decided not to move back to the re-built site.

Regulars of the Drapers Arms, further along Cowgate, may be interested to know that the pub takes its name from a business that occupied that building for many years, run by a Charles Armstrong, who was, unsurprisingly, a draper. However when it became a pub, it was originally called the Old Monk.

Just further along from the Draper’s Arms, under what is now PMP Recruitment and the Crescent Bridge, was originally Peterborough’s cemetery. This was in use from the early to mid 19th Century, when a new cemetery was established in Broadway. When the Crescent Bridge was being constructed, those involved had the unenviable task of digging up the skeletons and taking them to the new cemetery. The bridge opened in 1913, and was much-need, replacing two level crossings, where there had been numerous deaths.