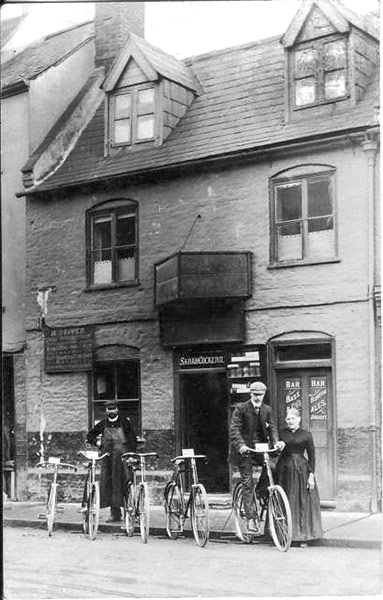 The premises of Matthew Driver who was a cycle maker on Midgate. The small business was ran alongside the Boot & Shoe Inn where Matthew was a boarder to licensee Sarah Cockerill.

Sarah was the daughter of John and Sarah Griffin of Dogsthorpe, born 1836, she had several siblings, Robert, Ester, John, Thomas and Henry. She married John Cockerill, a Furniture Broker in 1860, after a spell as Scullery Maid at the Cathedral Precincts for Peterborough Cathedral. They moved to The Boot & Shoe Inn, Midgate between 1871 & 1881, the pub was thought to be owned by the Soames Brewery.

John Cockerill Snr. Died in 1897, leaving Sarah to carry on as Licensed Victualler of The Boot & Shoe Inn, making available a shop premises for her boarder Mathew Driver, Cycle Maker. This continued until about 6 months after this photograph was taken in 1905, when Mathew (Matthew) Driver died at the age of 34.