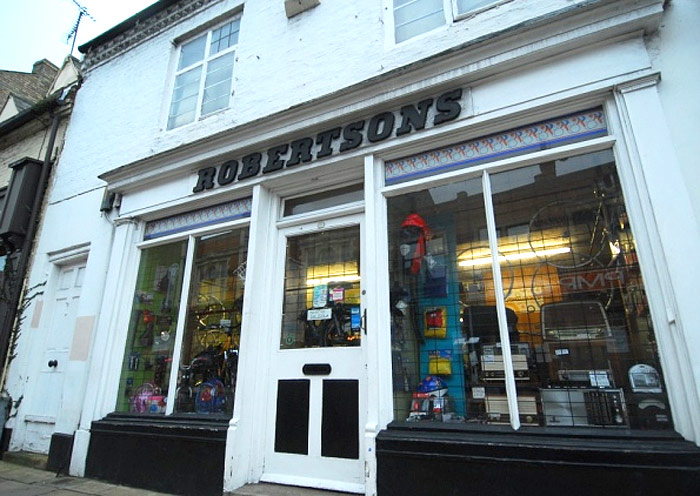 From the Peterborough Evening Telegraph on 15th February 2011 ………

A bike shop which has kitted out generations of Peterborough cyclists is to close after more than a century of trading.

Robertsons Cycle Centre, which has been a fixture on the corner of Cowgate in the city centre for decades, has now stopped selling bikes and is preparing to close its doors in the next few weeks.

The firm, which has been trading in one form or another since 1896, is closing following the retirement of distinguished city businessman Peter Upson, who has been firmly in the saddle since 1962.

The 82-year-old has retained a hands on approach behind the counter, despite having motor-neurone disease, to the point where the children who he first served in the 1960s were bringing their grandchildren into the shop.

He said: “I am leaving behind many fond memories.

“Just the other day a man in his late 50s came in and said I had sold him his first bike at the age of nine and here he was with his own grandchildren.

“I have also been really lucky with some incredibly loyal staff over the years and I will miss this place and the customers but unfortunately my health means I have had to call it a day.”

Mr Upson has been married to Anne for 55 years and moved to Peterborough in 1940 at the age of 14.

The end of his three-year stint in the army coincided with the growing popularity of the television so he decided to set up a business in the city.

He said: “I became a director of Elektron Services which sold televisions based in Lincoln Road and we had eight other branches locally.

“My two partners and I then bought two neighbouring shops in Cowgate and set up Robertson’s All Sports Ltd where we sold cycles and toys.”

His partners decided to retire in 1985 but he decided to keep going and opened a smaller store in Cowgate as the Robertsons Cycle Centre.

He has also managed to combine the business with his hobby as a member of the British Vintage Wireless Society buying, repairing and then selling old-fashioned radios.

According to Mr Upson, the secret to more than 50 years’ selling bikes is adapting to the customers.

He said: “Every customer is different and they all have a point of view, so the trick is seeing it from where they are standing.

“It is also important to move with the times and adapt, we have gone from the small-wheeled cycle to the advent of the BMX and mountain bike over the years.”

THE “Robertson’s All Sports” trade name was first registered in 1896.

In 1908 family member, DJ Robertson, won an Olympic Gold Medal in the 3,000 yards team race and a silver in the steeple-chase the last time the Olympics were held in London.

In the 1920s, the family firm acquired a HMV dealership and in the 1930s began selling Vespa scooters.

A branch of Robertson’s All Sports was opened in 1940 in Cowgate with manager Len Andrews at the helm.

In June 1962 Duncan Robertson sold the family firm to Mr Upson and his two partners, Mr Snell and Mr Smith and they also bought the neighbouring cycle shop.

The new company traded for 23 years expanding to sports, cycles, toys and models before it became the Robertsons Cycle Centre in 1985.