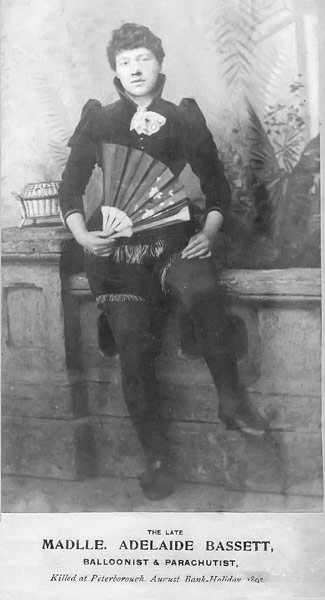 Born in 1859, Adelaide was the wife of Henry Bassett and was a smoke balloonist in the early 1890s in partnership with and student of Captain Orton.

She made about 30 ascents in her career (all with Captain Orton) and flew smoke balloons in probably the first “double-aeronaut” para-jump in Europe.

The following was published in the The Aberdeen Weekly Journal, Aberdeen, Scotland, on Tuesday, 6 August 1895 following her tragic death ………

Female Parachutist Killed
‘Miss Adelaide Bassett, a London parachutist, was killed in Peterborough yesterday evening. In connection with a fete there had been arranged a balloon ascent and a double parachute descent by Captain Orton and Miss Bassett. The latter’s parachute was broken by a telephone wire on the balloon being released, and as she had consequently no means by which to descend, she jumped from the balloon to the ground and was killed.’

Smoke balloons, without onboard fire, became popular for fairs and exhibitions as parachutes were perfected. In particular, the standard grand climax of many celebrations at the turn of the 20th century was to have a trapeze artist ascend for hundreds of metres below a balloon belching black smoke before jumping from the trapeze to parachute back to Earth.

The smoke was not just for dramatic effect; it was essential to retain heat, as no fire was carried on board. Clean air cools rapidly in an ascending balloon, not only by radiation but also by the adiabatic process of expansion. The heat in the carbon particles is not affected by the change in atmospheric pressure during the ascent, so the smoke acts as a heat sink in addition to freshly sealing the porous muslin fabric typically used in such balloons.