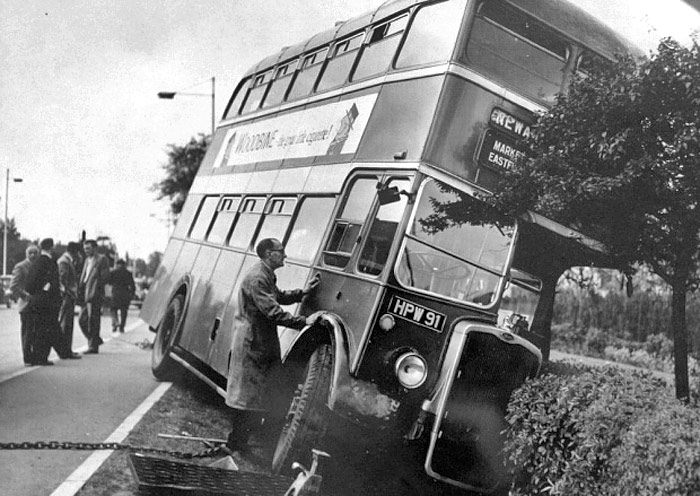 A bus crash in the 1960s. Exact location unknown but the bus appears to be heading for Newark via Eastfield Road.

Mick Smith has kindly enlightened us on this one …… “Hi. I remember seeing this bus in 1960. I was 10 years old and went to
Newark Hill School until 1961. I remember my teacher coming into the classroom and saying there was a bus that had mounted the pavement.

On leaving school at 3pm, I was hoping that the bus was still there. I could see the bus, which was about halfway between the Wheatsheaf pub and Newark Avenue which the bus had been approaching on its left. It would be approx 250 yards from Newark Avenue corner and I clearly remember this. I believe it was a sunny day but can’t say what month”.

Ian Menzies also added ….. “The man with his hands on the bus is my maternal Grandfather, Charles F Wilson, who joined The Peterborough Electric Traction Company Limited in 1925 and left the Eastern Counties Omnibus Company Limited in 1964. He was with the same company all the time apart from 1939-1945 when he continued his link with the RAF having joined the RFC in February 1914 as an aircraftsman.

I suspect I still have the coat he is wearing in the photo.  He spent his life in the workshops and at the time the photo was taken I think he was in charge, which would be no doubt why he was inspecting the bus”.