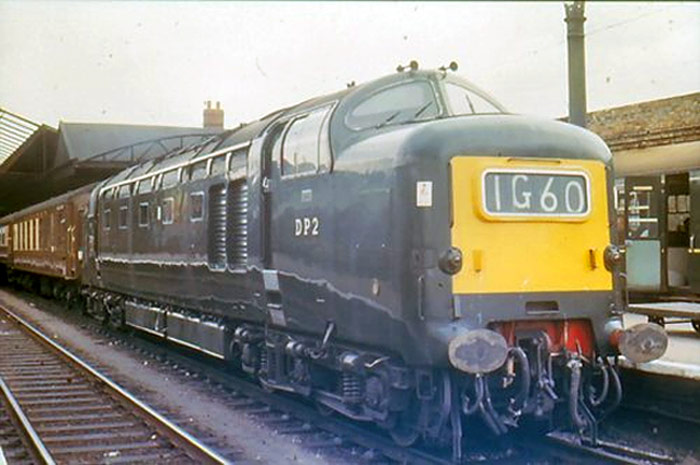 Built in early 1962, DP2 was used extensively to gauge just how powerful diesel traction could be and during one test it managed to start a 16 coach train on an upward gradient and obtained 30mph in just 575 yards ! This immensely powerful engine went on to become the fore-runner of the class 50
“Hoover” engines that went on to haul many a main line express right up to the 1980s.

DP2 eventually came to grief on 31st July 1967 at Thirsk. While hauling a passenger service, it collided with derailed cement wagons, the damage being so severe that after removal to its owner’s works a decision was taken to scrap the engine, with dismantling taking place in 1968.

Many thanks to Allan Sibley for information on this loco and also to Martin who adds ………..

DP2, meaning Diesel Prototype number 2, was a prototype Type 4 mainline diesel locomotive built in 1962 by English Electric at their Vulcan Foundry in Newton-le-Willows to demonstrate its wares to British Railways. As the Deltics were then in production, it was decided to produce the locomotive on the same production line; the bodyshell used for DP2 reputedly being the eighteenth made. While DP2 looked like a Class 55 Deltic locomotive in outline, there were many detail differences; particularly the large bodyside radiator vents at one end, and the single roof fan as opposed to the four symmetrically placed fans on the Deltics. These differences revealed that DP2 was totally different from the twin-engined Deltics internally, having only a single V16 diesel engine and generator. The loco was later updated with electronic control systems to become the forerunner of the Class 50.

It was of Co-Co wheel arrangement and was fitted with an English Electric 16CSVT engine of 2700-hp. It had a maximum speed of 90 mph and weighed 105 tons. It was initially painted in standard BR Brunswick Green livery and later (from 1965) in two-tone green livery with a light green lower bodyside band.

BR tested it initially on London Midland Region services out of London Euston and later on the Eastern Region from London King’s Cross. Here it was frequently rostered on Class 55 diagrams but had difficulty in keeping to schedules – possessing only 82% of the power of a Deltic. On 31 July 1967 it was involved in a serious accident at Thirsk, colliding at speed with the de-railed Cliffe (Kent) to Uddingston (Glasgow) cement train. The damage proved to be so great that it was considered uneconomical to repair. It was withdrawn from BR service in September 1967 and moved to the Vulcan Foundry where it was stored until it was scrapped in 1970, its reusable parts being provided to the Class 50 pool of spares, its engine initially went to D417/50 017 ‘Royal Oak’, but ended its working days in 50 037.