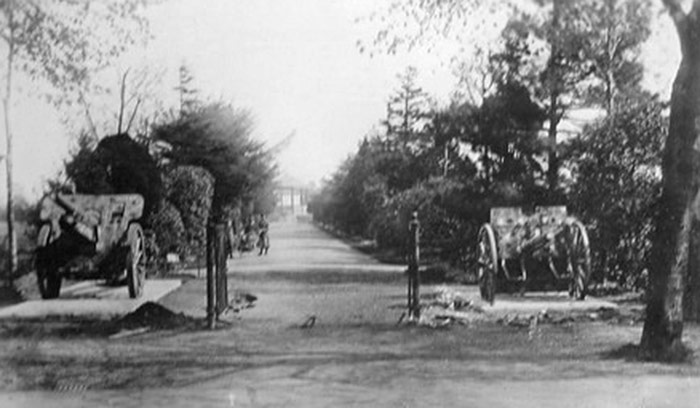 Pictured just after the conclusion of the Great War, two captured German guns stand gaurd at the entrance to Central Park with the bandstand just visible in the distance.

Guy Riley adds ….. “These guns were captured by the men of 6Bn, Northampton Regiment on Tuesday 18 September 1918, at Ronssoy Wood.

During the engagement Capt. A.J.Frost won a bar to his M.C.

The engagement is described below by my Grandfather, Lieut. Charles Cecil Hill M.C. who was Adjutant to Col. R. Turner, writing in the Peterborough Citizen on the 10th anniversary of the guns capture.

“We cleared Ronssoy Wood of small pockets of the enemy, who were putting up local delaying actions. It was here that the gun was captured – and Capt. A.J.Frost won a bar to his M.C.. The battalion was held up by twelve machine guns and a field gun, firing over open sights. He got his company some 150 yards forward by short rushes to within about 60 yards of two machine guns. A tank came into view and the Boche gunners turned their fire on the newcomer-and began to think of departing. Capt. Frost rushed and took the position and brought enfilade Lewis-gunfire to bear on the enemy lines. That was how the field gun and two others was captured. A V.C, one of four gained by the Northamptonshires, was won that morning by Lance Corporal Albert Lewis, who was killed three days later.””