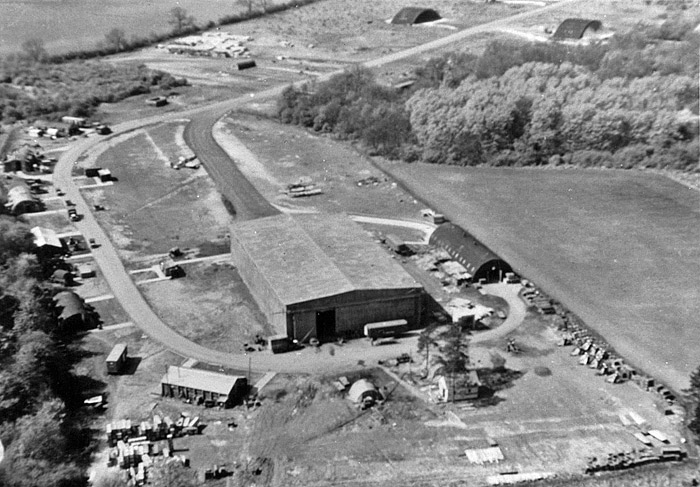 This month (October 2015) saw the announcement from East Northants Council that the bottom corner of the old airfield at Kings Cliffe would be redeveloped to host 55 holiday lodges.

The site, known locally as Jacks Green, was the wartime maintenance area for the USAAF base and was home to a huge Callendar Hamilton hangar that not only supported the resident fighter aircraft but played host to the last ever airfield concert from the legendary Glenn Miller.

To commemorate the significance of the site to Glenn Miller aficionados, a memorial was erected on the surviving foundations of the hangar in 1987. It is not clear what the future holds for the memorial but the likelihood is that it will be repositioned with the old hangar base being broken up.

The image below shows the maintenance site during wartime with the main airfield off to the top right. The Glenn Miller memorial is currently sited fairly central to where the hangar was.

The concrete floor of the old hangar survives today and the metal rail along which the huge hangar doors were moved can still be found intact …… see below.

The outline of the track along which planes used to taxi between the maintenance site and the main airfield is still visible today and you can also just about identify the hard standing dispersal sites alongside the track where planes would be stored. Owing to the shape of these areas, they were known as “frying pan” dispersal sites and each would have its own simplistic “blister hangar” to provide shelter and to hide the presence of the plane when viewed from above.

You can see two of these small sites with hangars in the top right of the old image up above.

Today the best of these sites still holds evidence of the old blister hangar via lengths of robust steel strapping (see below).