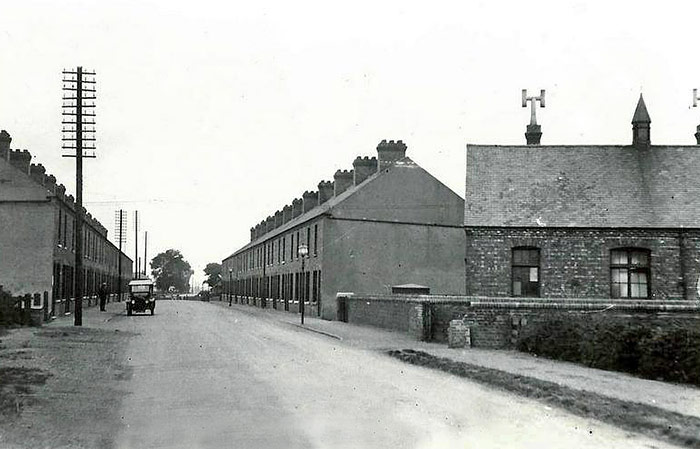 Looking west through Kings Dyke towards the level crossing in the distance with the school near right.

From the Peterborough Evening Telegraph in 2002 …….

It had a school, a chapel, a general store, 72 homes and even a bowling green. But, today, only the chapel building and the school still remain. Standing at the side of the A605, the Kings Dyke you see in front of you now is just a shadow of its former self. The village school that was once filled with the sounds of children’s laughter and tears now stands silent and derelict.After 50 years of worship, the Methodist chapel held its last service in 1982, and the rows of terraced houses which lined the road have long since been knocked down.But the unbreakable bond that existed in its former community remains intact.And this could not have been more clearly demonstrated when more than 150 people turned out for the official ceremony to unveil a memorial in honour of all the families who once lived there.Whittlesey councillor Stephen Garratt, whose grandparents used to live in one of the houses, and who first came up with the idea to erect a memorial, was visibly choked as he welcomed former residents to the celebration.The blue ribbon was cut by 90-year-old Connie Wells believed to be the oldest surviving ex-Kings Dyke resident and former Norwich City Football Club manager and player Ron Ashman, who also grew up there.Along with her daughter, Maureen Sansom, and sisters Dorothy Crilly (81) and Lillian Churchman (85), Mrs Wells reminisced about happy times at 35 Kings Dyke.Mrs Wells, whose maiden name was Rose, said: “My family were the only people to live in that house. After my parents, my brother, Wilf, moved in and lived there until it was demolished. And although I moved out to Farcet when I got married, I didn’t live there long. We missed Kings Dyke so much we moved back and lived at number six until it was pulled down.“They were magical times. I had five sisters and eight brothers, and we were all born there. It was only a three-bedroomed house, but it never felt cramped.“We loved it. We all used to go to Kings Dyke School and I was the second person to marry at the Kings Dyke Sunday School. There was a football team and bowls, and we used to go on Sunday School outings. And I used to make the teas for the cricket team.“It wasn’t part of Whittlesey, it was a community in its own right.When I eventually had to move out to the flat where I live now at Inhams Court, I was very sad. I didn’t want to go, but because the houses didn’t have bathrooms we had to move, because they weren’t worth doing up.”Mrs Wells’ daughter, Maureen, added: “They were brilliant times in Kings Dyke. There were so many places we could play as kids. We used to get old pieces of tin and slide down the sides of the pits and play on the other pits covered with grass.”From 1897 to 1983, when the last eight cottages, known as Lilac Terrace, were turned to rubble, hundreds lived in the close-knit community in the shadow of the then booming brickyards.One of the last people to go was mother of-four Noreena Norfield, who lived there from 1949 until 1982. She said: “My first daughter, Wendy, was only six weeks old when we moved into Kings Dyke, and my son David was one. Both of my other children, Janet and Bev, were born there too.“Our house was number 62 and was one of the row known as The Back Eight because they didn’t line the road, but overlooked the brickworks. The whole community was just one, big, happy family. We didn’t have to always be in each other’s houses, but you knew that people would be there for you.“The houses were very basic. they didn’t have bathrooms, there were just three bedrooms, a living room, a front room, a kitchen and a toilet outside. We used to wash in a tin bath in the kitchen, but we absolutely loved it. There were so many things to do. There were bowls and darts and dominoes, cricket and football teams, and even a brass band.”Another person who had vivid memories of the strong community spirit was mother-of-three Eileen Quince. She said: “We had wonderful parties. I remember the Queen’s Coronation. we had a competition for the best-decorated house. I was 14 at the time, and my nan’s house won, so I tried to put a “first” sign in the window and fell down and had to go to the party with a gash in my head.”