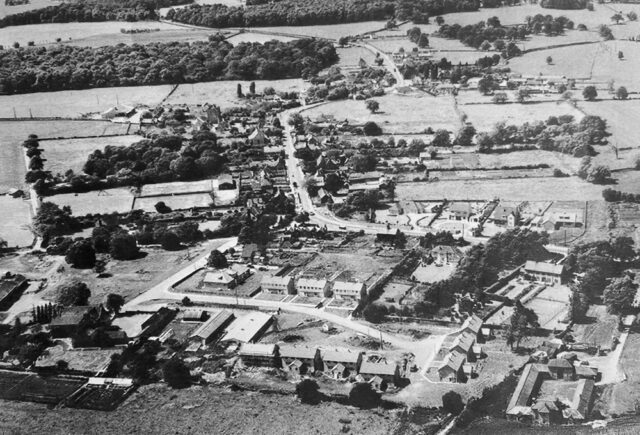 A lovely photo sent in by Trudie Meadows and her detailed comments are below …..

This is Longthorpe Green ….. Thorpe Hall Farm (or as we called it Home Farm) is in the bottom right hand corner. You can see the close proximity of all the Farm buildings ….. it was just approached by a different road, off Thorpe Road.

You can see quite clearly the main Road winding through the village up to the Fox and Hounds and beyond, by the woods and on to the first gate to Milton Park. At the first bend in Thorpe Road, known as Maxwell’s Corner, you can see the road leading to the Manor. Our house was the first house to be built on Manor Lane for my parents late 1940’s/early 1950’s ….. it’s behind the row of cottages which were on the corner and it had a sloping roof which you can just see in front of the tree which was in our garden. Our address was Manor Lane, Longthorpe and we lived in a field for a long time before the large bungalow was built next to us.

Gradually, the farm houses were built, the end ones are very close to Home Farm, which I didn’t realise until I saw this photo. On the bottom left you can see the Chicken Farm and the Manor and it’s grounds. Holywell is just in the field at the back of the Manor ….. well it was, it’s now surrounded by houses !

On the left side, close to the Manor is the Dairy and the cow sheds – now where Carlton Court home is (I think it’s called that ! Opposite us and the Dairy is where they put the bull out every day ….. he always seemed quite docile but we wouldn’t dare go near just in case ! It was a lovely village when we lived there …… our family had been in the village since the mid 1840’s and my brother and I were the 6th generation to have lived in the cottage which is now the shop which my Grandmother started in the 1930s.