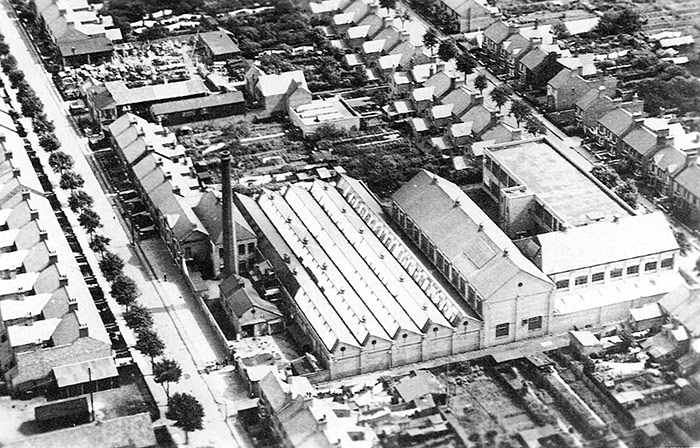 This factory on Huntly Grove was opened in 1878 by Leicester based Luke Turner who had been running a very successful business in his home town since 1862 supplying elasticated products for “braids, cords, garters, corsetry, bandages, covered fine elastic for millinery, drapery, umbrella, welts for underwear and kindred goods”.

Luke Turner died in 1897 his sons carried on the business, which continued as a private company until 1938, when it became a …public company. Three years later it was taken over by Penn Elastics, an American-owned firm that merged with Clucksam & Kemp in 1966 when both the Leicester and Peterborough factories were closed down. Until then they were still operating under the title Luke Turner & Company. From 1966 the Leicester factory was occupied by Stibbe-Haddon Ltd (a subsidiary of G Stibbe & Co, Ltd) for the manufacture of knitted fabric; that company operated under its own name, although purchased by the Spirella group 1972. The Leicester factory was closed in 1974. Since then it has been used for storage, initially by the Leicestershire Area Health Authority who vacated the building in 1992.

The Peterborough factory was only partly demolished by 1967 and was soon to become the temporary base for Braidex before they moved on to Fengate.

In the image (taken around 1929), Huntly Grove is on the far right. The older buildings, with chimney, on the left were the original 1877 premises with the more modern buildings to the right added later.