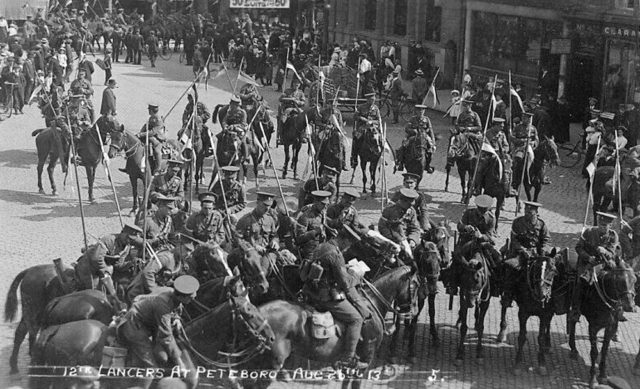 The 12th (Prince of Wales’s) Royal Lancers pictured on Market Place in 1913. The Lancers were a cavalry regiment of the British Army and were first formed in 1715. They saw service for three centuries, including the First World War and the Second World War.

The regiment, which had been based in Norwich at the start of the Great War, landed in France as part of the 5th Cavalry Brigade in the 2nd Cavalry Division in August 1914 for service on the Western Front. On 28 August 1914, ‘C’ Squadron of the 12th Lancers, led by Lieutenant-Colonel Frank Wormald, made a successful charge against a dismounted squadron of Prussian Dragoons at Moÿ-de-l’Aisne during the Great Retreat. The 9th/12th Royal Lancers celebrated Mons/Moy Day annually, which commemorated the last occasions on which each predecessor regiment charged with lances.