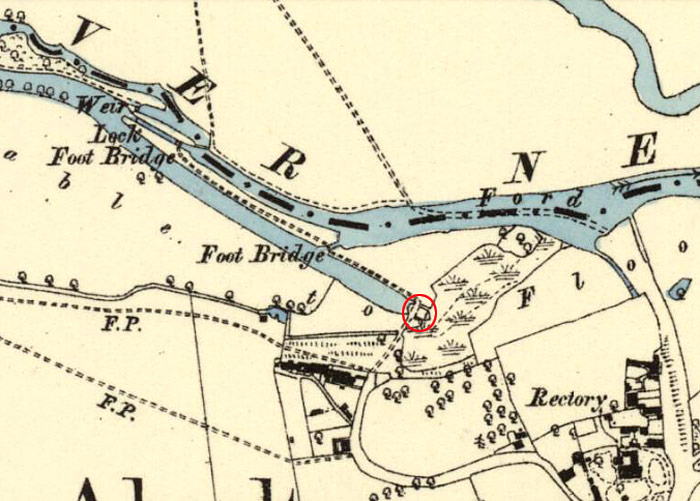 Few people who take the scenic walk across the fields from the foot of Mill Lane, Alwalton to Castor will be aware that their journey starts on the site of what was once a large watermill.

As you walk through the gates at the foot of Mill Lane, you step onto the site of the mill and if you look around, you can still see a few pieces of evidence to support its existence (see images below) …… which is good because very little is otherwise known about it. Archival records in Peterborough and Huntingdon have next to nothing to shed any light on the mill so what DO we know about Alwalton Mill ?

We do know that the site hosted a watermill as far back as the eleventh century because it was mentioned in the Doomsday book along with more than 5,000 other watermills across the UK. Water power was being exploited well before the first windmills appeared more than 100 years later.

By 1128, three mills were reported on the site and this was still the case in 1649 when they were known as “The Town Mills”. The three mills were almost certainly on the same site, in the same building and all harnessing the same power source. At this time, two of the mills were believed to be traditional corn mills taking local corn and producing flour, the other being a fulling mill which used intriguing devices to clean and process wool based product.

The first nineteenth century census in 1841 showed the mill in the hands of Lincolnshire born “master miller” Chapman March who by 1845 carried the title of “miller and bonecrusher” ….. the latter in reference to the fact that one of the mills was now a bone mill which converted animal bones into fertilizer.

A newspaper report in 1850 announced that the mill had been leased to Chapman March for a further 21 years by the Dean & Chapter of Peterborough for the princely rent of just 20 shillings per annum !

The mill was thriving in 1851 with March now employing four men but his reign as master miller ended prematurely in 1857 when he died at the young age of 45. By November 1857, the mill was being offered for sale by the deceased’s brother Henry March, the sale particulars offering “corn and bone mills plus grounds and buildings over five acres”.

No buyers were forthcoming with the majority no doubt put off by the feared impact on local milling of the arrival of the railways and the repeal of the long standing Corn Laws in 1851 which had previously favoured local landowners and allowed them to dictate market prices. Now the market was open to bulk imports by river and rail which in turn dramatically slashed the profitability of corn mills in particular.

With no buyers in sight, the mill was auctioned to the highest bidder at Peterborough’s White Lion Inn in February 1858. The auction catalogue offered “bone & coal yards adjoining the river, dwelling house, gig house, stables, walled crew yards, other outbuildings, large garden, 5 acres of pasture land. Mills include five pairs of stones (four french, one gray) fitted with valuable dressing machines – nearly new – by Varley & Sedgewick of Leeds and other machinery of superior character and in good condition“.

The winning bidder was James Royce who had been miller for a short time just across the fields at Castor Mills. James came from a line of millers but had a past reputation for business failures so that combined with the precarious economic future of the mill probably didn’t serve up the ideal match !

At some point in the late 1850s, records suggest that one of the mills was being powered by a steam engine which was becoming increasingly common at other water mills and presumably provided a more reliable power source.

The 1861 census showed James Royce as “miller and corn merchant” but also with four young children living at the mill. In 1863, a fifth child was born to his wife Mary by the name of Frederick Henry Royce who in later life was to form one half of the Rolls Royce partnership.

Signs of problems started to arise later in 1863 as first James repeatedly advertised for “experienced millers” and was still doing so in August 1864 while, in between, wife Mary was advertising for a Governess to help bring up the five young children.

In February 1867, the Royce’s business failed and Alwalton Mill appeared in national newspapers as bankrupt with the Royce family having abandoned the business and moved briefly to Ickleton in Cambridgeshire and then on to London shortly after. Head of the family, James Royce, died in poverty at the Greenwich Workhouse in 1872, aged just 41.

Meanwhile, the mill was auctioned off in late 1867 although there are no records showing who, if anybody, purchased it. Whatever the outcome, the mill did not continue as a business and although the building appears to be present on an 1885 map, it was certainly gone shortly afterwards with the feeder waterway to the mill already being transformed into a boating location complete with waterside boathouses.