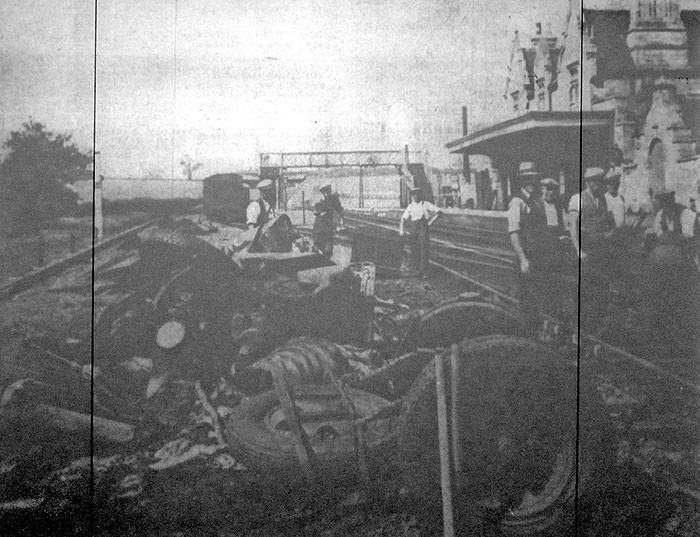 At 1:14am in the morning, Yorkshire based Herbert Ashworth crashed his London bound Bowyer & Jackson (Dewsbury) lorry through the fence adjoining the crossing gates and bumped across the lines before bouncing off a concrete wall and rolling the vehicle onto its side across the tracks.

Despite the dramatic impact, the driver was completely unhurt and scrambled out to be confronted by the oncoming 12:40am Peterborough to Birmingham express goods train. He frantically tried to alert and stop the train but driver Fullen and his crew from Saltley impact were unable to stop in time and the impact threw the lorry across the adjoining line before it exploded into flames.

“When I scrambled out after the crash, I ran up the line to stop the approaching train”, said Ashworth, “I had just got beyond the signal box shouting and waving my arms as the train got up to me. I could see the driver braking his engine but he had no chance to pull up”.

Ashworth later claimed that his brakes had completely failed him and he was left with the choice of hitting one of the roadside houses or crashing the fence between the gates and the station.

Despite damage to both tracks and sleepers from the fire, maintenance gangs from Peterborough had the line back open by 5:30am and the undamaged goods train was able to continue its journey having earlier been backed up short of the signal box to wait it out.