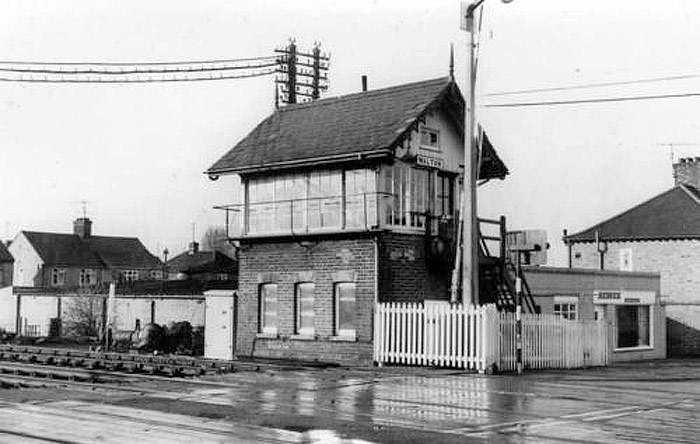 This was the Great Northern Railway signal box at Walton crossing in the 1970s – one of two boxes at the site with a standard wooden Midland Railway box in the space between the GN lines and the Midland line. There was also a station on the Midland line here which closed in the early 1950s.

Each box had its own level crossing gates which were shut independent of each other. There was a small space between the gates where cows, which were on the way to and from milking at Browns farm just up the road, were sometimes trapped in between the two sets of gates – often with one or two cars waiting for the other set of gates to open !

In the 1950s and 1960s long trains with 9Fs and ex LNER 01s and WD 2-8-0s pulled long trains of wagons slowly over this crossing waiting to get into Westwood yard.

Road traffic tailed back at peak times in the late 1960s even before the hundreds of new houses which were put up for the new townships. When the new A47 Parkway road bridge opened, this crossing was closed making for a two mile diversion for cars but a foot bridge was built for pedestrians and cyclists.

[thanks to http://ukrailways1970tilltoday.me.uk for the info]