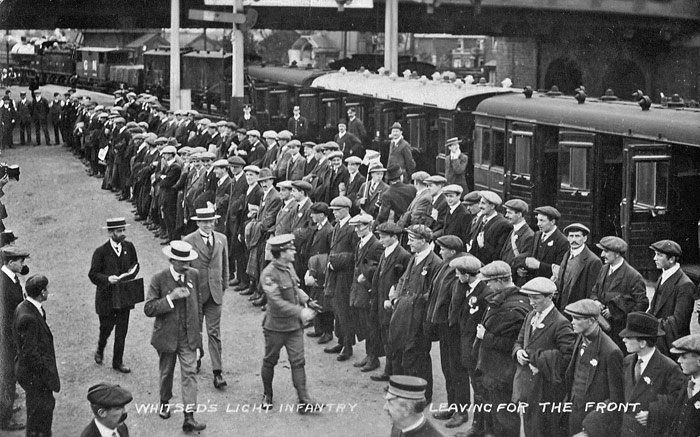 The caption on this excellent Great War postcard reads “Whitsed’s Light Infantry – Leaving For The Front” and shows volunteers awaiting departure from Peterborough North in September 1914.

Whitsed was local councillor Isaac Whitsed who was instrumental in pulling together young recruits from major city employers of the time including Werner Pfeiderer (later Baker Perkins) and Perkins Westwood Works.

The Whitsed’s went on to form part of the Northamptonshire Regiment’s  7th Batallion who, after training in the south of the country, landed at Boulogne in September 1915 where they made up part of the 73rd Brigade, 24th Division who went on to see action at Battles of Loos, Hooge, Guillemont, Vimy Ridge, Messines, Battlewood, Pilkem Ridge, Cambrai and Mabeuge.